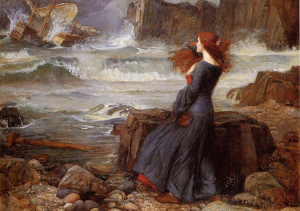 Did Atlantis sink, or did the water rise to cover it, and why does it matter?

Another thing to make you go hmm…

Atlantis is treated as a myth by most people in science for a number of reasons, but chief among them is the lack of geological evidence so far for the sinking of an island city beyond the Pillars of Hercules (which marked the sides of the Strait of Gibraltar).

But reflect upon the implications that arise when the possibility that Atlantis actually existed is viewed in light of the claim by Plato (where our first reference to Atlantis originated) that Atlantis as a Kingdom existed in a time period that happens to coincide with the last Ice Age, a period leading up to some 12,500 years ago. And further consider that he also stated that Atlantis’s destruction occurred within the period of time that was during and just after the end of that ice age?

Viewing the demise of the Atlantean Culture from the possibility of it being the result of the end of the last Ice Age causing sea levels to rise, as opposed to the subsidence of a large geological land mass beneath the surface of the ocean, seems to answer a number of questions that have been posed by material science relating to the lack of probability of the existence of Atlantis as anything other than a myth, providing a much more plausible explanation for science to consider than the subsiding of the area due to plate tectonics causing the subduction of a plate (which would have taken a very long time, and would have had to occur as far back as a few million years ago).

Some points to ponder in support of rising sea levels causing the destruction of Atlantis:

*  The existence of Atlantis in a time period that preceded the end of the last Ice Age would place it anywhere from 22,000 years ago when the Ice Age was at its peak and the sea levels would have been at their lowest, to 12,000 years ago when temperatures had settled out to a range that was at or near today’s climate causing the seal level to start to rise, eventually reaching the level at which it is today.  Of course the Atlantean culture could also have existed in a period that began much more than 22,0000 years ago, but it would seem that the 20,000 BCE to 10,000 BCE period is the most likely range to consider.

*   As an example of recent discoveries of structures now submerged deep in the ocean that had to have been constructed prior to the end of the last ice age, what is “thought” to be a perfectly shaped underwater pyramid that is apparently oriented by the cardinal points has been found recently by the Portuguese Hydrographic Institute of the Portuguese Navy between the islands of São Miguel and Terceira, in the Azores of Portugal. The pyramid was found in an area of the mid-Atlantic that has been underwater for about 20,000 years. (see the link section at the end of this article for more information about this discovery)

*   If Atlantis existed up to the end of the last ice age, or even a bit longer, then this was a period that is recent enough that there could conceivably have still been historical records relating to Atlantis in the Library of Alexandria at the time that Plato is alleged by some to have visited there. It is my understanding that it is also thought by some that it was while studying at the Library that he was introduced to the story of Atlantis as a culture and its demise some 9,000 years before his time, roughly about 9,500 BCE (give or take a few hundred years, or 11,500 years ago).

As pointed out above, the possibility that Atlantis was inundated by rising sea levels as the result of the end of the ice age counters the claim raised by geologists that the lack of any geological evidence of a major area sinking in the Atlantic proves that Atlantis never existed.

So, in conclusion, why would contemplating the possibility that the destruction of Atlantis could have been caused by rising sea levels rather than by a continent sinking make any difference in how the legend is perceived by mainstream culture?

First of all, why do all the stories about Atlantis have it sinking rather than being inundated? I believe that the most common phrase that I have seen used to describe the final moments of the city of Atlantis is that “it sank beneath the waves”, generally interpreted to mean that it sank like a boat would. But that is not the only possible meaning of the phrase. “Sank beneath the waves” can also be used to describe what happens to a fixed object as the water level rises, as when a river floods. But a matter of semantics is not what is important here.

What is important is that while no physical proof has been found through scientific research over the last several hundred years that could be used to validate the assumed cause for the destruction of Atlantis being as the result of a continent sinking, physical proof has been found of the destruction of other cities as the result of rising sea levels.

As I said in the opening, “Atlantis is treated as a myth by science for a number of reasons, but chief among them is the lack of geological evidence so far for the sinking of an island city”. However, we do have an increasing amount of physical evidence that has been found in just the last few decades that provides multiple examples of cities and other manmade structures that are now under water in areas that have no geological evidence of ground subsidence. What that means is that these structures could not have been built more recently than since the last ice age ended; because that was the last time the area would have been above water. And if it is true for these areas, could it not also be possible that a culture that we call Atlantis existed but was, as legend claims, submerged beneath the seas, only not by continental subsidence, but by a rising sea level?

Underwater Pyramid Found Near Portugal Has Portuguese Navy Investigating
“The pyramid was found in an area of the mid-Atlantic that has been underwater for about 20,000 years. Considering this is around the time of the last ice age where glaciation was melting from its peak 2000 years prior, whatever civilization, human or not, that was around before the ice age, could be responsible for building the pyramid. While the Portuguese Navy still hasn’t determined the origins, many might question why this hasn’t been first reported on sooner than late 2012.”
Underwater Pyramid Found Near Portugal

Lost city ‘could rewrite history’
“Marine scientists say archaeological remains discovered 36 metres (120 feet) underwater in the Gulf of Cambay off the western coast of India could be over 9,000 years old.”
http://news.bbc.co.uk/2/hi/south_asia/1768109.stm

Some older books on this subject that might be of interest:

“The Story of Atlantis and The Lost Lemuria” by W. Scott-Elliot containing two stories that were first published separately in 1896 and 1904
http://www.amazon.com/s/ref=nb_sb_noss?url=search-alias%3Daps&field-keywords=The%20Story%20of%20Atlantis%20and%20The%20Lost%20Lemuria

“Atlantis, Mother of Empires” by Robert B. Stacy-Judd, first published in 1939
(This is like the copy that I have, but there are cheaper versions out there)
http://www.amazon.com/Atlantis-Mother-Empires-OVERSIZE-archaeologyz/dp/B00N169QC8/ref=sr_1_3?ie=UTF8&qid=1426365181&sr=8-3&keywords=Atlantis%2C+Mother+of+Empires

And a more recent book: