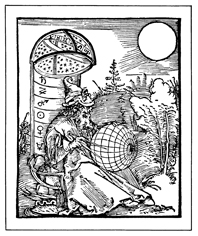 In a recent discussion about the U.S. Military Remote Viewing Handbook that is now available for public access, I brought up that what is today called Remote Viewing is a practice that I was introduced to early in my studies [1] under the name of “Mental Travel”, a specific practice within the area of Clairvoyance.

The term Remote Viewing was coined by physicists Harold E. Puthoff and Russell Targ at SRI International in 1972 to label a process whereby a person allows their awareness to expand sufficiently to be able to focus on a remote location and/or event, viewing it as if they were physically there.

The basic perception of how this is possible is that the consciousness of every individual has the ability to access information through means beyond the five physical senses. These additional “non-physical” or “extra-sensory” senses provide us with the ability to observe or sense information for which there is no apparent physical means of access. They are lumped together by modern Parapsychology under the name of Extra-Sensory Perception or E.S.P.

Now, in addition to its original reference to “seeing at a distance”, the term Remote Viewing has been expanded to encompass a range of abilities that in the past were grouped under the name Clairvoyance within the Oriental Occultism Philosophy[2] modalities of the late 19th and early 20th centuries.

Carlos S. Alvarado, PhD, Visiting Scholar, at the Rhine Research Center, in a recent post on his blog titled Remote Viewing and Stock Market Predictions discussed a paper authored by Christopher Carson Smith, Darrell Laham, and Garret Moddel entitled “Stock Market Prediction Using Associative Remote Viewing by Inexperienced Remote Viewers”, which explained, in part, “each participant in the study remotely viewed (emphasis mine) an image from a target set of two images, one of which he or she would be shown approximately 48 hours from that time. Of the two images in the target set, one corresponded to whether the Dow Jones Industrial Average (DJIA) would close up, while the other corresponded to whether it would close down at the end of the intervening trading day. For feedback, the viewers were shown only the picture actually associated with the actual market outcome. In aggregate, the participants described the correct images, successfully predicting the outcome of the DJIA in seven out of seven attempts (binomial probability test, p < .01). Investments in stock options were made based on these predictions, resulting in a significant financial gain.”

My purpose in mentioning the preceding is not to in any way detract from the value of the work being done today in studies such as this, but to merely point out that the ability to “see” an event in the future that is now being called “Associative Remote Viewing”, and in some cases that I have seen, “Mental Time Travel”, is not a new thing, but has traditionally been studied under the classification of Clairvoyance (Clear Seeing).

I am not sure whether this re-labeling of abilities is being done in an attempt to distance this area of Parapsychology from any association with fortune telling or other “non-scientific” practices, or that today’s researchers are truly not aware of what Clairvoyance is, nor are they conversant with just how much research into this area has already been done by their predecessors in the West over the last 125 years.

Although it could be both, I am afraid that it is predominantly the latter, because much of what I read about present research doesn’t seem to be actually covering any new ground or provide for any new approaches, so what follows is a brief introduction to Clairvoyance in its many forms for any who might not be familiar with the subject of Remote Viewing under its original name.

Because of the way it is frequently used in today’s popular culture, the word Clairvoyance more often than not elicits an immediate negative reaction. But when used properly Clairvoyance can either designate one specific psychic sense: “Clear Seeing”, as in the case of the “Stock Market Prediction Using Associative Remote Viewing by Inexperienced Remote Viewers” study referenced above; or it can be used in a broad sense to encompass the entire set of psychic senses exhibited by individuals who were either born with a working awareness of these extra senses, or who have worked on developing one or more of them through study and exercise, as is the case for the Remote Viewers that the Military Manual was developed for.

The half dozen individual “psychic abilities” most often found under the heading of Clairvoyance are listed below. They are interrelated parts of what could be viewed as a parallel nonphysical nervous system, and in most cases, all are possessed on at least at some level of capability by those considered Clairvoyant.

1. Clairvoyance: “Clear Seeing”, the ability to “see” people, places and events through means other than physical sight, a “vision” using a more traditional label, or Remote Viewing and/or Mental Travel to use the more modern one

Clairvoyance may provide an image of something in the present or from the past. The latter form has been used successfully in Archeology on dig sites to “see” what the area looked like in the far past. Decisions on where to dig on the sites that were based these images have borne fruit in finds that would have otherwise been missed without using this technique. It has also been used in the viewing of maps of areas like the Sahara (and labeled as Remote Viewing by the Archeologists) to select areas for exploratory digs. There too it has produced good results.

Clairvoyance may also provide an image of the future, as in the Stock Market study cited above, but those who were traditionally experienced in this area always warned that at the moment that an image is viewed it is the “probable” future. But as time passes the probable future is subject to change, and the further out in the future that the image viewed is, the more likely the change.

Those who practice Clairvoyance also frequently experience Clairaudience with the images, in other words, pictures with sound.

2.  Clairaudience: “Clear Hearing”, the ability to hear sound that is “psychically” rather than physically generated. For example, this could be a disembodied voice or voices, or the sound of music when there is no physical source for it, or the full range of sounds that come with a Clairvoyant Vision of either a distant place (Remote Viewing), or sounds associated with the past of a physical location which the Clairvoyant person is experiencing, etc.

3.  Clairsentience: “Clear Feeling”, in the popular vernacular, an Empath. One who possesses Clairsentience is able to feel the emotions of others, and can frequently do so whether the person is in their presence or at a distance if there is some form of linkage between the individual and the Clairsentient.

Emotions can also be felt by a Clairsentient that have been imbedded either in the past or present in material objects or physical areas. Sensitives and Mediums who can sense strong emotions from the past in their surroundings fall under this classification. Some also use the term Psychometry for this ability, but I do not believe this to be accurate since in Psychometry much more than just emotions can be detected. Clairvoyance frequently also comes into play in Psychometry.

4.  Claircognizance: “Clear Knowing”, the ability to just “know” that something is true without any physical means of acquiring that knowledge. A somewhat mundane example would be to suddenly “just know” that an alternate route should be taken to avoid an area, without knowing that an accident has occurred on the road ahead. Premonitions are one form of Claircognizance.

The last two kinds of Clairvoyance that follow generally go unmentioned by name in early reference works on the subject. They were forms of information that were just accepted as being so much a common part of our ability to interpret nonphysical energies in physical symbolisms such as a scent, as to not really require singling out. A classic example would be that smell of flowers than most of us have occasionally experienced when there were no flowers present. Although more recent reference works do provide them with names, they are still rarely mentioned.

5.  Clairalience: “Clear Smelling”, also sometimes labeled Clairescence or Clairolfactance, it is the ability to sense non-physical information in the form of a scent or smell.

6.  Clairgustance: “Clear Tasting”, similar to Clairalience in that non-physical information is sensed in the form of a taste. Since the physical senses of taste and smell are so closely related, these two psychic senses are also frequently experienced together.

[1]Beginner’s Exercise That Was My Introduction to Mental Travel

As was mentioned in the opening, I was introduced to the practice of Mental Travel early in my studies. As part of that introduction there was a beginner’s exercise provided for learning Mental Travel/Remote Viewing. For those who are willing to put in the effort, a summary of that exercise is given below. It starts with learning to do Mental Travel or Remote Viewing within the boundaries of your home, and since this is an exercise that will generally require repeated practice initially, it is recommended that you choose a room for this exercise that you can make use of frequently, and where you won’t be disturbed.

While many people are at least familiar with the Theosophical Society by name, I find that most in general seem to have very little awareness of how large a role this society has played in the numerous Western Spirituality Movements that have sprung up over the last 125 years or so. Names like H. P. Blavatsky, Colonel Henry Steel Olcott, and W.Q. Judge are always mentioned in articles about the founding of the Theosophical Society and are credited for heavily influencing the growth in interest in Eastern Philosophies that followed the founding of the Society, but many other names that show up in discussions about the Spirituality Movements that came into being in the 20th Century are also people that either played a prominent leadership role in the Theosophical organization throughout their lives, or were active in the Society for a period of time prior to breaking off to form their own organizations. This list includes names of people such as; Annie Besant, Katherine Tingley, Rudolf Steiner, Jiddu Krishnamurti, Alice Bailey, C.W. Leadbeater, A.P. Sinnett, T. Subba Row, G. de Purucker, Jinarajadasa, Manly P. Hall, The Ballards (who formed the “I Am” movement), Rudolf Steiner (who was expelled from the Society by Annie Besant, along with the entire German Section of the Society and all of its branches because of Steiner’s development of Anthroposophy), and Max Heindel (who formed the Rosicrucian Society in Oceanside California).

A number of prominent organizations (in addition to those already mentioned) were initially formed by Theosophists, such as the London Society for Psychical Research (S.P.R.) founded in part by F.W.H. Meyers, W. Stanton Moses and C.C. Massey, prominent Theosophists of the late 19th Century, and in San Jose, California, The Rosicrucian Brotherhood (AMORC).

A sampling of names of prominent people who credited Theosophy with either providing them with their world view, or for having had a profound influence on their lives include Elizabeth Clare Prophet, Thomas Edison, L. Frank Baum (Wizard of Oz), Paul Gauguin, William Butler Yeats, Henry Ford, Mohandas Gandhi (who in his autobiography claimed that the members of his Indian National Congress “were all Theosophists”),Elvis Presley(!), Jane Goodall, and rumor has it, Albert Einstein, just to name a few.

An excellent timeline covering the growth of the Theosophical Society, including all of the in-fighting, splintering off into new groups, and internal politics that keep reshaping the society into something that I doubt Blavatsky would recognize, can be found in the book; The Theosophical Movement, 1875 ~ 1950, put out by The Cunningham Press, Los Angeles, CA in 1951, if you can find a copy through one of the Antiquarian Book Sellers.