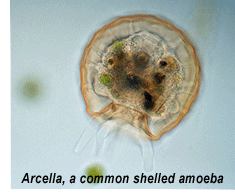 Consciousness, the human mind, is defined by neuroscience and neurosurgeons to be the result of electrochemical activity within the brain.  In the view of neuroscience the firings of synapses in different areas of the complex arrangement of specialized cells and nerves that make up the brain combine to somehow produce our cognitive abilities.  It is the use of this brain generated and brain localized mind/consciousness that this field of science says enables us to do such things as: find and consume food, seek shelter when necessary, procreate, and react to outside stimuli in ways that occasionally involve the flight or fight response.  Without the full complex structure of the brain present, neuroscience says that there can be no consciousness, no mind, and no cognitive functions.

But what about the single cell amoeba, Arcella?  As the name implies, it is a single cell consisting of a nucleus encased in an outer layer of tissue called a “test”.  It has no brain, no nerves, no synapses to fire, and yet it demonstrates much of the same functionality with respect to consciousness and reasoning abilities that mammals do.  For instance:

1. Some kinds of Arcella collect sand particles that they attach to the “test” to create a protective shell

2. It can extend pseudo pods to act like feet, legs and arms, giving it the ability to move about and manipulate its environment.

3. Feeding on plankton and diatoms present in the water where it lives, it can sense whether or not the particles it encounters are suitable for food, rejecting things like sand particles. When it finds a suitable food particle, such as plankton, it uses the pseudo pods to draw it in, then surrounds and consumes it.

4. It has an awareness of its orientation, and possesses the ability to right itself if it becomes inverted by exuding gas bubbles along one side, lifting that side up until it can flip over. It then reabsorbs the bubbles.

All of these actions indicate a pretty capable mind/consciousness.  But, if there are no physical attributes in this single cell similar to that of the human brain, no synapses to fire, and no nervous system to conduct commands from the nonexistent brain, where does it do its thinking?